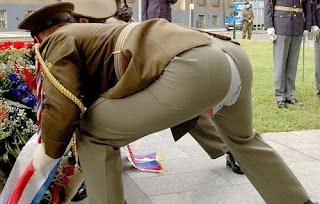 Talking about pipe specification seems pretty dull, until your screw pile splits open while it’s being installed on site.  When Piletech started out, we used to order pipe to one specification – AS1163.  However a series of incidents led us to revise that, and since 2004 we always order pipe meeting two different specifications to control the quality of the weld on the pipe.  This blog is to give more detail on what we mean when we say ‘dual spec’ pipe, and why it’s so important for screw piling.

There are two main ways of making a hollow steel tube:
·         A molten piece of steel is extruded into a tubular shape – called seamless pipe
·         A flat plate is rolled into a circular shape, and the edges are welded together (so you end up with a seam weld) – called rolled plate pipe

Initially, Piletech started off using pipe specified as AS1163 – Cold-formed structural steel hollow sections.  This specification is developed for steel used in a structural capacity – such as buildings & bridges – it is steel that is designed to transfer loads.  It’s a good specification, but not entirely appropriate for screw piling due to three key areas:

Firstly, for strength testing, a small section of the pipe is tested as per the following diagram. As you can see, it is only tested in one direction, and not tested over the welded area. 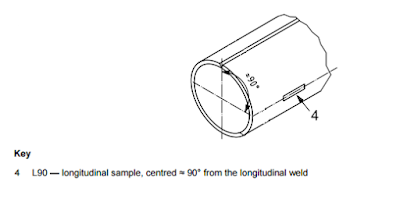 Secondly, testing and inspecting that seam weld is ‘at the manufacturer’s discretion’.  Meaning if pipe is ordered strictly as per the code, the length of weld on the pipe is potentially not inspected, examined, or tested at all. We have had a piece of pipe turn up once where a full section of the weld was missing.

Lastly for pipe ≤406mm diameter, the tolerance for manufacture is ±10% for wall thickness. This means that a pipe with 12mm wall thickness could arrive with only 10.8mm thick walls, and still meet specification, and you’ve already used all of your 0.9 structural safety factor.

It became clear to us that ordering stock standard pipe that is AS1163 specified, is actually not good enough for screw piling for the following reasons:

1.       The weld could be defective (or as mentioned, even completely missing in sections), causing failure during installation as per Image 1 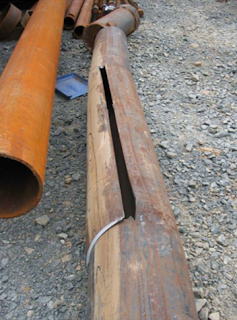 2.       The wall thickness could be insufficient, causing failure as per image 2 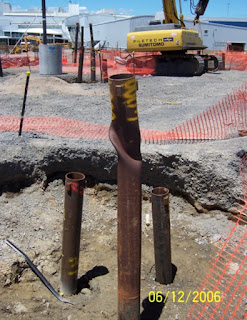 These two types of failure are entirely because of the high torque (turning force) the pipe experiences when it is being screwed into the ground.  Once the pile is in, the welded seam sees a lot less stress (this static state is what AS1163 is designed to satisfy).  So it’s clear that the pipe needed for screw piling is not the same as the steel pipe needed for regular structural actions.

Thus we started looking into alternative specifications to supplement AS1163 and found API 5L.

API 5L is a specification for pipe used in the hydrocarbon industry.  API stands for the American Petroleum Institute, and this specification can cover both seamless, and welded pipe suitable for use in conveying gas, water, oil and other liquids. In layman’s terms, it’s pipe used to transport flammable liquid under pressure.  Accordingly the welds are given a very high importance.

There are three key benefits of API 5L:
1.       Every single piece of pipe is hydrostatically tested (not just a sample), and must pass without leakage through the weld seam or pipe body.
2.       The weld on each pipe is non-destructively inspected by either electromagnetic or ultrasonic testing - giving complete confidence the welded seam is uniform and continuous.
3.       For pipe ≥ 219mm diameter, a sample of the weld and a sample of the pipe are both transversely tested as per the diagram below. 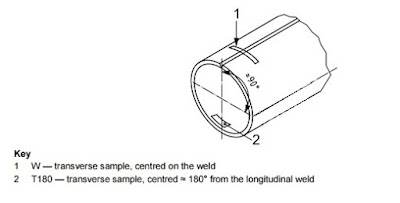 All of the above gives us the greatest confidence that the pipe that turns up to our sites will not break due to manufacturing error while we are screwing it into the ground.  It also "engineers out" the possibility of delays, additional costs, and quality issues ensuring the foundations on which your building sits will hold firm for the next 50-100+ years.
Posted by The Screw Files at 14:36 3 comments:
Newer Posts Older Posts Home
Subscribe to: Posts (Atom)